My ARM fleet, it ain't no Armada -yet

My ARM fleet has grown over the years, but is as yet no Armada. What began with a single Raspberry Pi Model B+ and soon grew with Banana Pro and a BeagleBone Black to no less than four running ARM cores, was in the end of the 32-bit era a cluster-like stack of SBCs consisting of Raspberry Pi's 2, 3 and 4 (two examples of each), so 24 cores running, with the afore mentioned Raspberry Pi Model B+, Banana Pro and BeagleBone Black forming the reserve, together with a Cubieboard 4 that went out with a bang! due to overheating -and I still hope to be able to revive it -I hope it was the card or the PSU that went bang!, I can't find anything on the board. I must have a PSU that's able to deliver 5V-4A somewhere....

Then the Raspberry foundation brought out their 8GB Raspberry Pi 4 Model, together with a 64-bit OS. So I went out and bought one, and I bought a 64-bit Odroid-N2+ as well -after my experiment with a 32-bit Odroid-XU4 went well.

The 64-bit fleet is in the build-up phase and will consist of three Raspberry Pi 4 Model B and two Odroid-N2+ (one with Android, the other with Linux), also 24 cores running.

Good news on the 32-bit front: the Cubieboard 4 lives! It is the PSU that died -just as I thought. I was able to flash a new OS to the onboard eMMC by using a USB 3.0 cable between a PC and the Cubieboard. Now to the hunt for a 5V 4A PSU with the right connector -those for e.g. an Odroid-XU4 don't fit, too big, but there might be an adapter. If the Cubie goes up, I'll have 40 32-bit ARM cores up and running! I think I'll try FreeBSD on the two Raspberry PI 2's by that time.

Less good news on the 64-bit front: Though all my three Raspberry Pi 4's now merrily run Raspberry Pi OS 64-bit and my first Odroid-N2+ 64-bit does the same with Android64 9 PIE, my 2nd Odroid-N2+, the one I meant for Linux, gives big troubles. The HDMI port seems to have a problem, as I only get 'digital signal error' out of it. Going in via SSH -thanks to PuTTy- gives a sluggish, underperforming board, not the blistering fast cruncher I had in mind. So, I have 24 64-bit ARM cores running, but I am not happy with six of those.

About the Odroid-N2+ there are four things I'd like to mention.

Actual life always goes in another direction than the carefully laid-out plans you made.

The present active 32-bit fleet of my ARMada consists solely of two Raspberry Pi 3's running the latest version of 32-bit Raspberry Pi OS and one Odroid-XU4 running Ubuntu Mate 20.04, so a mere sixteen cores where I had planned twenty-four.
Two Raspberry Pi 2's, an Odroid-C1, a Banana Pro, a Raspberry Pi B+ and a BeagleBone Black form the 1st line reserve -as I know they will function when powered on.
The 2nd line reserve is formed by two Cubieboard4-CC-A80's and a Banana Pi M2, boards that have me baffled as to why they won't run when I say so -or at least when I power them on and all the blinkenlights are doing their things.

The 64-bit fleet is doing more than well at the moment however. Two Odroid-N2+ boards -one running 64-bit Android 9 PIE-, three Raspberry Pi 4's and two Jetson Nano's perform up to expectations and give me 32 running 64-bit ARM cores. Apart from the occasional 64-bit ARM application, the twenty-six 64-bit cores running Linux mainly run WEP-M+2 in 32-bit alt_platform mode, as our man in Vietnam, DavidBAM, might have noticed.

Changes upcoming in the fleet!

The admiralty -me- has ordered a Compute Module 4, with 32 GB eMMC, WiFi and 8GB of RAM and an I/O board to go with. Downside is that has an estimated delivery date of somewhere in February 2022...

The 32-bit taskforce has welcomed the Banana Pi M2 (original A31s variant), the Odroid-C1 and the Asus Tinker Board S for a comparative trial. Absolute loser was the Banana (see WEP benchmarks), that might have been hampered by the PSU, the same PSU -albeit with a different extension cable- that powered the ailing Raspberry Pi 3. Speaking of that Raspberry, it was cured by having a PSU that delivers 5V and 3A, instead of 5V and 2.5A.

The reserve will be split in an active and an inactive section, and the single- and dual cores (so the Raspberry Pi B+, BeagleBone Black and Banana Pro) will be forming the latter, a mere four cores in total.
The active reserve will be operational -when active- on WEP, WuProp and iThena only, and will be formed by the Raspberry Pi 2's, the Banana Pi M2 and the Odroid-C1, four Cortex-A5 and twelve Cortex-A7 cores.

The main 32-bit taskforce will be formed by the Raspberry Pi 3's, the CubieBoard 4's -both still showing great promise-, the Asus Tinker Board S and the Odroid-XU4, 36 cores altogether.

When the CM4 arrives the 64-bit taskforce will also be 36 cores strong, so my fleet must still be able to advance in the WEP rankings.

These users thanked the author davidbam for the post:
SolidAir79

I think this is fool-proof but could you just try it for me please? • There are 10 types of people in the world; those who understand binary, and those who don’t

I will also receive a 5V/3A USB charger that will power my Banana Pi M2 -for starters. The first tests with the Banana Pi M2 appeared to have been done with a 5V/2.1A PSU, which might explain the lackluster performance. The Noctua NC-U6 cooler, aided by a 60mm Noctua fan, must be able to shave of at least some 20°C from the SOC temperature so I was astounded to find out that the initial tests revealed temperatures as high as 76-77°C. Perhaps that's why the original Allwinner A31s variant was pulled from the market by Sinovoip -together with the pulling out from the market of the A31 SOC models by Allwinner themselves. We'll find out very soon.

I will also try to power the Cubieboard4's with the 5V/3A USB charger and hope this works well enough, otherwise I'll have to tinker a bit with the cables and connect them to a 5V/4A PSU. I still have the best of faith in the Cubieboard4's and hope they will perform as good as the Odroid-XU4 does.

The Banana Pi M2 is fully under control in the second test!

The Banana Pi M2 got its 5V/3A PSU and I moved it to the other side of the man cave and noticed that CPU temps dropped a little bit to 69-71°C and then decided to install ZRAM.
I then read up more on ZRAM and SWAP and adjusted Kernel parameters to use ZRAM before and instead of SWAP.
On a system with low memory such as the Banana Pi M2, after adding ZRAM, you can add the following lines to /etc/sysctl.conf (and then enable in real-time with the appropriate commands.)

These users thanked the author Dirk Broer for the post (total 2):
SolidAir79 • davidbam

My new Chinese Chipset cooler -variously known as KKMoon HB-802 or PCCooler HB-802- arrived and was confiscated by the Odroid-C1 for tests.
Without fan it runs now @1540 MHz at 50°C, which is some 24°C lower than before and I think the cooler isn't even properly seated yet.
Tomorrow I'll connect the 80mm fan to see what that will bring -and take pictures of the contraption.
The 80mm Noctua shaved off an additional 7°C, which is less than I hoped for. The 60mm fan of the Banana Pi M2 shaved off an additional 9°C....
Must be the broader fins of the NC-U6, the HB-802 is quite thin in comparison. But what an area...

Left picture: full frontal nude view of the HB-802. In the right picture the Banana Pi M2 in the background.

These users thanked the author Dirk Broer for the post:
davidbam

Hot news from ARM fleet HQ: the promised CM4 that was due for delivery in February 2022 was in fact delivered today! And such a tiny package, the size of a small matchbox. 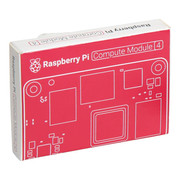 As the two tested chipset coolers prove to be so effective in cooling a SBC, there have been requests within the ARM fleet to order more. But which one? And for what board?
I will first switch the coolers of the Odroid-C1 and the Banana Pi M2 to see what the impact is, and then order more for the Odroid-XU4 -known to hit the 84°C within seconds without cooling- and the ASUS Tinkerboard S. The Tinker Board S presently runs 'Tinker OS' -which is Linaro by another thinly disguised name, and it is badly maintained as well. You have to literally download everything on top of the basic OS as supplied, and they are behind in almost everything, kernel included. The Odroid-XU4 runs a far better supported Ubuntu Mate as supplied by Hardkernel themselves, but both the ASUS Tinker Board and the Odroid-XU4 can't show CPU temperatures in their basic configuration. I will switch both to Armbian, the ARM SBC operating system of choice for most SBC boards. Cutting edge software technology, take my word.

The 32-bit squadron will be augmented with a 2nd hand SolidRun HummingBoard-i4Pro! This will relegate the Banana Pi M2 and the two Raspberry Pi2's to the reserve -the inactive section, as the Cortex-A9 cores of the HummingBoard are much better performing (as in MIPS/MHz), and higher clocked as well (@1200 MHz ass opposed to OC@1000 MHz for the Pi2's and stock @1000 MHz for the Banana M2 ). I suspect it will surpass the Pi 3's performance-wise, as the (@1536 MHz) Odroid-C1 already performs on par with the Raspberry Pi 3's (@1200 MHz).
The 32-bit squadron's Cubieboard 4 CC-A80's are still giving trouble, both on 5V/4A PSU with right connector plug and on software version level. Choice is between old Android 3 or a Linaro Linux with kernel 3. A lot will depend on the eventual performance level and cooling capabilities.

The 64-bit squadron will soon get the Raspberry CM4, as I found a good cooling solution -both heatsink and fan. There are talks about future acquisition of Orange Pi 4B's, Odroid-C4's and Banana Pi M5's, as well as Google Edge TPU's and Intel NCS2 NPUs, but nothing official.