Radxa: Pi's with rocks in

The title is a paraphrase of Sir Terry Pratchett's 'Music with rocks in' (Read: 'Soul Music'), but now applied to the SBC landscape. There is a real plethora of possible Pi's nowadays (e.g. Sinovoip's Banana Pi M5, Marcel Thürmer's Blueberry Pi, FriendlyElec’s Nano Pi K2, Shenzhen Xunlong's Orange Pi 4B, The well-known Raspberry Pi 4B, Tantron's Roseapple Pi), and there are also SBC's with 'Rock' in their name (e.g. Pine64's ROCK64 and ROCKPro64)

And despite claims that it was 'much better and faster than the Raspberry' -ruthless marketeers often quoting it as 'an overclocked six-core Cortex-A72'- real-life experience often found boards equipped with the RK3399 (and not just only those of Radxa: Pine64’s RockPro64, FriendlyElec’s NanoPC-T4, and Khadas’ Edge line, just to name a few) lacking in both software- and hardware support, if not in sheer performance. And just as fast as the Rock PI 4's were offered they were suddenly withdrawn by the sellers I frequented (Antratek, Botland, Conrad, Reichelt, etc.)....

Searching where all those Rocks had suddenly gone also brought me to where they came from. They (amongst them a certain Tom Cubie of Cubieboard fame) had started in 2013 with a 'Rock' SBC board,

featuring a quad-core Cortex-A9 RK3188 that can also be found in your older Frankendroid TV boxes.
Their next board was the 2015 SOM-based 'Rock2' 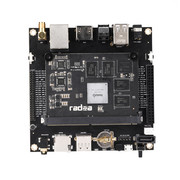 Logic now dictates that their next board would have 'Rock3' in it but it is not always very dependable, logic, so their next model was in fact the before mentioned 2018 Rock Pi 4, here with both under- and top side.

Essentially the same CPU as their Rock Pi 4 in a different SOM-packaging, and with added RK1808 NPU and a standard heatsink on top of the SOM.

Again with the CPU underneath the board, so be sure to buy the separate heatsink too!

Their latest board is the Rock 3,

without Pi, but with a quad-core Cortex-A55 RK3568 on the right side of the board, and that is the top side in this case.

In an attempt to restore sanity in their numbering the next model to be is the Rock 5, a real interesting octo-core with four Cortex-A76 and four Cortex-A55 cores.

This could be quite a cruncher and I do hope it will be affordable on both purchase and running.
I eagerly await their competitors replies (e.g. Odroid-N3, Raspberry Pi 5, Banana Pi M6, ASUS TinkerBoard 3, Jetson Nano2, BeagleBone MAIL (MAIL=Machine Learning+AI))....

Another product is their CM3, a compute module of the same form factor as the Raspberry Pi CM4 Compute Module, but with an extra row of connectors.

If they bring out octo-core Radxa CM5's as well, I'm in..

Funny: at least one supplier comes with the remark that the board cannot be delivered "Shipping Alert: Due to government regulations, nl.Mouser.com is unable to sell this product in your country."....