SETI@Home Is Over; The Fight Against COVID-19 Coronavirus Is Just Beginning

A forum for posts that make people think. Pretty much anything goes, but if you do politics .... play nice guys. Forum is visible to all, including guests.
Post Reply Previous topicNext topic
1 post • Page 1 of 1

#1 SETI@Home Is Over; The Fight Against COVID-19 Coronavirus Is Just Beginning

From Forbes. Original article is here

SETI@Home Is Over; The Fight Against COVID-19 Coronavirus Is Just Beginning
Kiona N. Smith
Kiona N. Smith
Science
I cover the history of science, technology, and exploration. 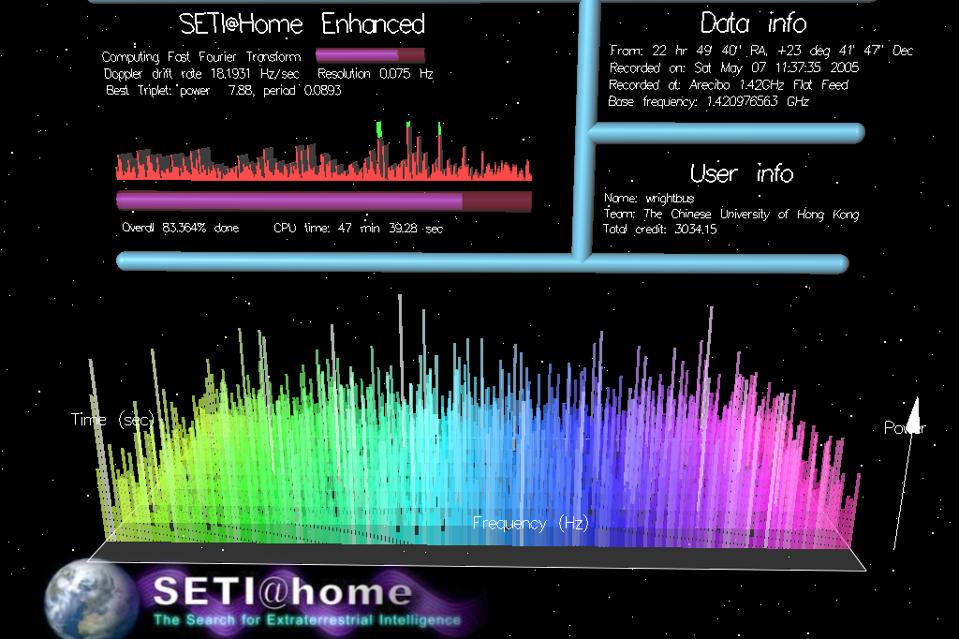 Color image of a screensaver showing how much SETI data a computer is processing.

After more than 20 years of searching for extraterrestrial radio signals, the SETI@Home project is going into hibernation mode on March 31. But just as SETI@Home winds down, another distributed computing project is asking for help in the fight against the COVID-19 coronavirus.

Searching For Extraterrestrial Life – At Home

For the last 20 years, volunteers have donated their computers’ processing power to help astronomers search radio telescope data for signals from alien civilizations. SETI@Home tackled the kind of computational heavy lifting that usually requires a supercomputer, but the project did it with thousands of ordinary internet-connected desktop and laptop computers – and even some Android mobile devices. By parceling out bits of computing work to all those individual computers, SETI@Home created a “virtual supercomputer” capable of processing massive amounts of astronomical data.

The idea was that most computers have a lot of downtime, when their processing power isn’t being used, and that could be put to work to comb through data from the Arecibo Observatory in Puerto Rico and the Green Bank Telescope in West Virginia, sorting through the proverbial haystack of radio “noise” from astronomical sources, telescope electronics, and human-made radio signals for anything that looked more interesting. In this context, “more interesting” means signals whose transmission power rises and falls or spikes abruptly, or signals that pulse regularly.

SETI astronomer David Gedye proposed the idea in 1995, and it was up and running by May 1999. In 2005, SETI@Home migrated to a new platform, the Berkeley Open Infrastructure for Network Computing (BOINC), which was designed to distribute data analysis work to networks of computers. The idea SETI had pioneered had spread to medical research, physics, and other fields. A few years later, in 2008, SETI@Home officially claimed the world record for the largest computation in history. Since 2016, SETI@Home’s “virtual supercomputer” has also helped crunch data from the Breakthrough Listen project.

But now the work is done – or at least the first step, the kinds of analysis that require the combined computer power of [number] personal computers, is done. “Basically, we’ve analyzed all the data we need for now,” explained the project’s organizers. “We need to focus on completing the back-end analysis of the results we already have and writing this up in a scientific journal paper.”

Fight COVID-19 Without Lifting A Finger

If you’re a SETI@Home alum, or if you’re just hearing about the project and wish you could have gotten in on it, don’t despair; there’s lots more work for your computer’s spare processing power, including helping medical researchers fight COVID-19. Folding@Home (a program similar to SETI@Home that focuses on disease research – specifically how proteins fold) just rolled out “an initial wave of projects” that simulate how proteins from SARS-CoV-2 (the virus that causes COVID-19) work and how they interact with human cells.

“Our specialty is in using computer simulations to understand proteins’ moving parts,” explained Folding@Home’s Greg Bowman in a recent blog post. “There are many experimental methods for determining protein structures. While extremely powerful, they only reveal a single snapshot of a protein’s usual shape. But proteins have lots of moving parts, so we really want to see the protein in action. The structures we can’t see experimentally may be the key to discovering a new therapeutic.”

In particular, the new batch of research projects are interested in how SARS-CoV-2 and SARS-CoV (the related virus that causes Sudden Acute Respiratory Syndrome, or SARS) interact with a chemical receptor on human cells, called ACE2. Both coronaviruses seem to latch onto ACE2 as a way of getting into the cell.

To get involved, start by downloading the Folding@Home application.

Anyone Need A Spare “Virtual Supercomputer”?

If protein folding isn’t your thing, SETI@Home’s home at BOINC also has a lengthy list of about 30 research projects in need of computer time. BOINC lets you sign up for multiple projects and decide how you want to prioritize your computer’s spare processing power. As with Folding@Home, there’s an application to download in order to get started.

In the spirit of SETI@Home, you can sign up for Asteroids@Home to help model the shape, rotation, and other physical properties of thousands of asteroids, Cosmology@Home to help figure out which models of the universe best match the available data, Einstein@Home to help search for weak signals from pulsars, Milkyway@Home to map the structure of our galaxy, or Universe@Home to simulate star formation. Other projects focus on mathematics, climate modeling, earthquake detection, and medicine.

Technically, you can still sign up for SETI@Home on the BOINC website. The project’s organizers say they’re not taking it down or disconnecting accounts; they’re just not assigning any new computing work.

That could change eventually, however. “We hope that other UC Berkeley astronomers will find uses for the huge computing capabilities of SETI@Home for SETI or related areas like cosmology and pulsar research,” wrote the program’s organizers. “If this happens, SETI@Home will start distributing work again.”

So far, SETI@Home hasn’t found any conclusive evidence of anyone – other than humanity – sending radio signals into space, but organizers say they’ve found some interesting targets for future study.

I am a freelance science journalist, bringing you interesting science tidbits, tales of discovery and critical looks at everything from deadly diseases to space exploration. I’ve written, online and in print, for Air & Space, Astronomy, Ars Technica, Discover, Drone360, Gizmodo, Popular Mechanics and the Washington Post. I hold a B.A. in Anthropology from Texas A&M University, and I’m currently based in Tulsa, where I share my office with a border collie and a crested gecko.
The best form of help from above is a sniper on the rooftop....